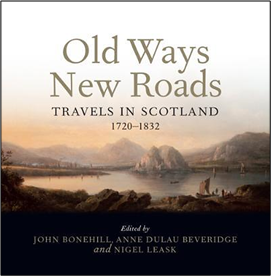 SGLH members may be interested in a temporary exhibition at the Hunterian in Glasgow under the title Old Ways and New Roads : Travels in Scotland 1720-1832, scheduled to run from 29th January to 9th May 2021. Originally planned to open in August 2020, the exhibition was postponed until the beginning of the New Year.  Sadly, as a result of the ongoing Covid-19 pandemic which has prevented the loan of exhibits, the exhibition has had to be reduced in scale.  Admission is free.  That said, many of the items which were to have been on display are illustrated in a new book with the same title which is being published in January to accompany the exhibition, containing essays by a variety of authors grouped under four thematic headings – The Theatre of War, Antiquities, Custom and Improvement, Picturesque Prospects and Literary Landscapes.  One of the chapters, entitled ‘Roads, Bridges and Designed Landscapes on the Highland Circuit’, written by SGLH Vice Chairman Christopher Dingwall, looks at the evolution of four great Highland estates associated with Inveraray Castle, Taymouth Castle, Blair Castle and Dunkeld House.  Edited by John Bonehill, Anne Dulau-Beveridge and Nigel Leask, and published in paperback by Birlinn Ltd, the book has the ISBN 9781780276670 and costs £20.00.