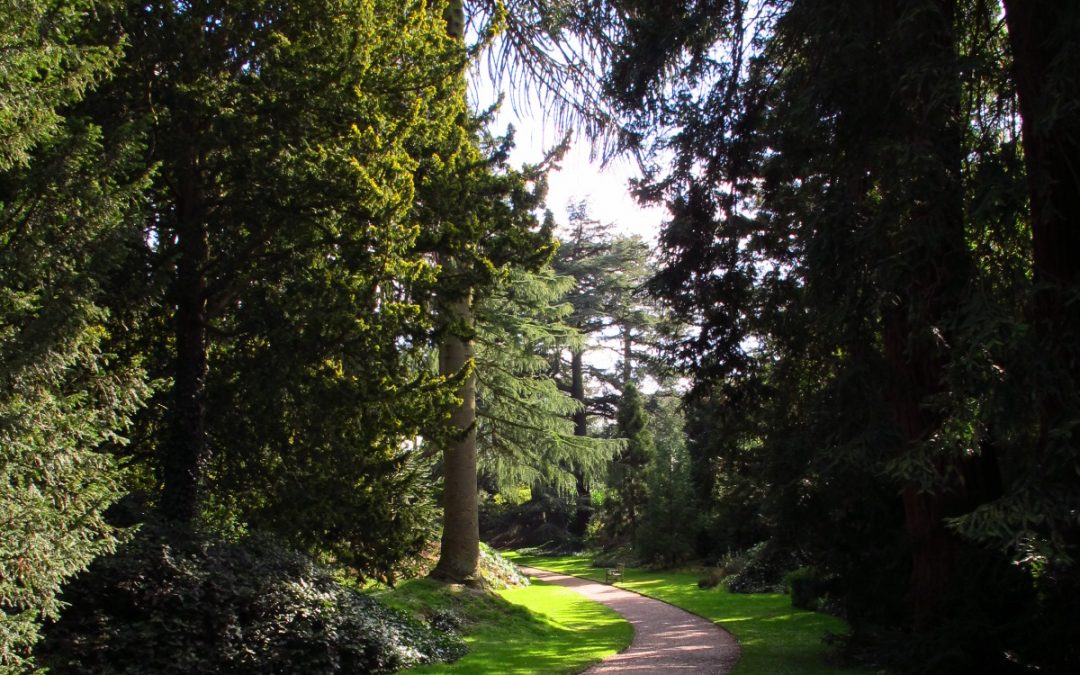 A visit by Matthew Benians in 2014

The gardens at Biddulph Grange, Staffordshire are under the ownership of the National Trust.  They were laid out by James Bateman and represent the eclectic tastes of the owner and include a Chinese Garden, Egyptian Garden, Himalayan Glen, pinetum and stumpery. 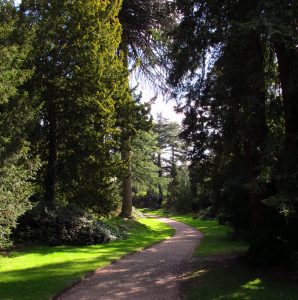 In 1842, just as Bateman started to create Biddulph, the Treaty of Nanking opened up China to the west and the Horticultural Society (now the Royal Horticultural Society) sent plant hunter Scotsman, Robert Fortune, to see what Chinese plants or systems of agriculture might be useful to gardens in Britain.  It is to Robert Fortune that Biddulph owes many of the plants in Bateman’s China garden: 190 plants came from Fortune’s many collections, including the hardy fan palm, Trachycarpus fortunei and Spiraea japonica var fortunei. 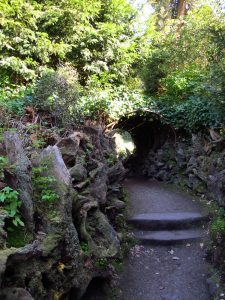 Bateman’s China garden is a hidden, mysterious place.  It is approached either from the mystery of the Stumpery or from the ice-house tunnel that emerges into the back of the Pagoda. Both routes offer a different classic tableau of what it was thought a Chinese garden should be.  From one direction, the view is of the red and turquoise Pagoda with its little lake and arching, gaily painted wooden bridge, arranged like the design on blue and white willow-pattern plates. From the other direction. is a view over the water to the bridge and the Great Wall capped by the Joss House.  The garden is a series of criss-crossing vistas from one architectural feature to another, which offer new compositions along the way. 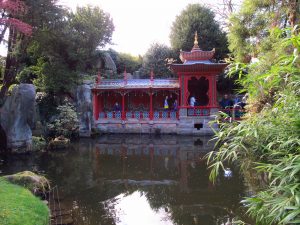 The pagoda in the China garden 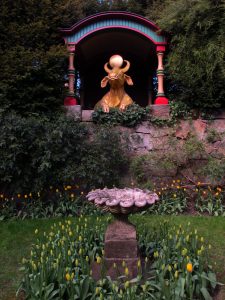 However, Bateman’s China garden was not created exclusively with Chinese plants.  It was and is home to as many plants from Japan, Britain and America too.  There are Japanese cedars (Cryptomeria japonica), Sarawa cypresses (Chamaecyparis pisifera ‘Squarrosa’) and specimens of the Chinese golden larch (Pseudolarix  amabilis, formerly fortunei), a deciduous conifer which Robert Fortune found in 1854, so beautiful when its leaves turn yellow in autumn.  Biddulph has one of the oldest specimens in cultivation. There is the pagoda tree, Paulownia tomentosa, remarkable for its large leaves, azaleas, bamboos, hostas, mahonias and the garden’s signature image three huge Japanese maples. 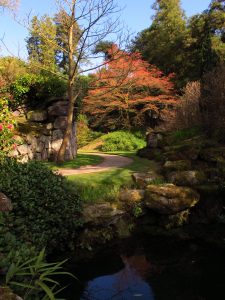 Acer in the China garden

Enter the pinetum though a curved stone tunnel.  Fine lawns flank a gravel path, with raised banks of different shapes and heights behind them.  Many of his conifer groups were planted on top of long raised mounds to improve the drainage at their roots.  The instant elevation also allowing the majesty of the upright trees to be viewed from below.  It is suggested that the mound-planting was an aesthetic preference to show to best effect a trees buttress root system on the surface of the soil, grasping at the earth to support the trees’ massive weight.

The Cheshire Cottage a half-timbered Cheshire Cottage with the date 1856 and the Batemans’ initials J&MB inscribed on the maroon plasterwork of the upper storey returns you to the English architectural vernacular following your trip around the world via. China, Egypt and the Himalayas. 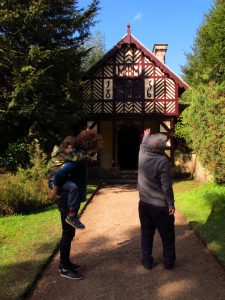 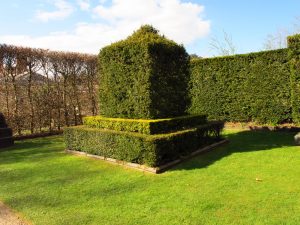 Topiary in the Egyptian garden 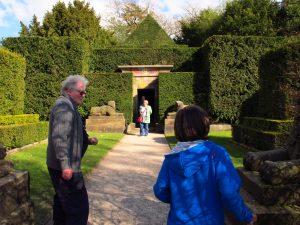 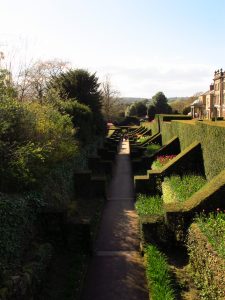