The Calcutta Botanic Garden was first set up in the 1780s by Lieutenant Colonel Kyd, a Scot from Forfarshire, then Secretary of the Military Department of Inspection in Bengal, at his estate of Sibpur across the Hooghly River from the city, writes Dr James Simpson OBE FRIAS. In 1786 Kyd proposed that the East India Company should take over the garden and the Court of Directors gave their formal approval in July 1787.

Kyd’s reasons for establishing the garden were practical: ‘not for the purpose of collecting rare plants … as things of mere curiosity … but for … disseminating such articles as may prove useful …’ The memory of the famine in Bengal which had followed the crop failures of 1769 were still fresh; there was a desire to break the Dutch East India Company’s monopoly of the spice market; and there was an interest in experimenting with the cultivation of teak for use in shipbuilding.It was to become one of the great botanic gardens of the world. 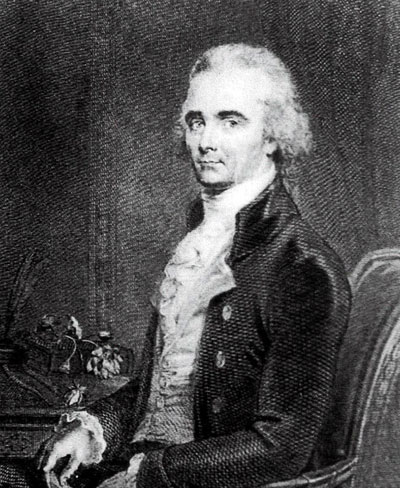 William Roxburgh: engraving by Charles Turner Warren from a miniature in the possession of his widow, Mary Roxburgh, first published with his obituary in Transactions of the Society of Arts in 1815

Following Kyd’s death in 1793, the Company appointed William Roxburgh as Superintendent of its ‘Botanical Establishment in Bengal’. Roxburgh had been born in Ayrshire in 1751 and retained a lifelong friendship with the Boswell family of Auchinleck. His university education began in the Edinburgh medical school in 1771, under Dr Alexander Monro (Secundus), and he appears also to have attended classes on Botany and ‘Materia Medica’ given by Professor John Hope, friend and correspondent of Linnaeus, in what is now known as the ‘Botanic Cottage’. This small building, designed by John Adam and James Craig, and now translated to Inverleith, was then the centrepiece of the Leith Walk Botanic Garden, established by Hope following his appointment as first Regius Keeper in 1761. Roxburgh grew up surrounded by all the great figures of the Edinburgh Enlightenment, of which the Garden, like the New Town which soon followed it, was a product.

Roxburgh’s first Indian appointment was in 1776 as Assistant Surgeon at the General Hospital at Fort St George, Madras, where he developed his career and reputation in a variety of ways, not least as a plant collector, and it was from there that he moved to Calcutta in 1793. Under his direction the garden evolved from its essentially utilitarian beginnings into a fully-fledged scientific establishment, dedicated to the systematic collection of plants from South and Southeast Asia, following the Linnaean system he had learned from Hope, through correspondence with Joseph Banks, and from J.G. Koenig during his time in India.

An indication of the Company’s commitment to Roxburgh’s appointment was the building of a substantial three-storey house for him on the river frontage, with bowed verandas and spectacular views up and down the Hooghly5. During his time as Superintendent, he trained a series of local artists to produce watercolour drawings, which were both scientifically accurate and very beautiful: his Hortus Bengalensis was published in 1814 and his Flora Indica in 1832, long after his death in 1815.

Roxburgh’s distinguished successors included a number of other Scots, the most notable of whom was Sir George King6, who substantially remodelled the Garden in the aftermath of cyclones in 1864 and 1869. He changed the layout from one which had been rigidly arranged on the basis of taxonomy to one based on geographical regions, in which combinations of species showed natural plant associations. He also created ponds and footpaths, built conservatories and, in 1882, a library and herbarium, based on plans obtained from Kew. He was appointed the first Director of the Botanical Survey of India in 1890 and retired in 1897. The first Indian Director, Kalipada Biswas, was appointed in 1937.

The East India Company’s Botanic Garden became the Royal Botanic Garden, Calcutta, and, following independence, the Indian Botanic Garden. It is the responsibility of the Botanical Survey of India (BSI), whose headquarters remain in Calcutta. It extends to over 300 acres and includes lakes and ponds introduced by King. Its remarkable plants include the Noble Palm (Corypha elata) which flowers once after forty to fifty years, and the most famous of all: The Great Banyan Tree (Ficus benghalensis), used by Roxburgh as a host for parasitic species. It is just a hundred feet tall, but its circumference is a quarter of a mile and its canopy covers four acres!

The Indian Botanic Garden has a most distinguished history. Unfortunately its current state is not good. The entire garden is badly under-maintained and its key buildings, notably the house built for William Roxburgh in 1793-5 and the library and herbarium of 1882 are derelict. A further problem is that the river ferry, by which the garden was approached from the city, no longer functions and the only access is by means of a long drive down, over and up the river. Happily, there are indications of renewed interest from the Botanical Survey and from the Governments of India and West Bengal. International concern has been registered, not least from Scotland, and it must be hoped that the Indian Botanic Garden will once again take its place as one of the great botanic gardens of the world.

This article is not based on primary research and the author acknowledges his reliance in its preparation on sources quoted in Robinson, Tim. 2008. William Roxburgh – the Founding Father of Indian Botany (Phillimore in association with the Royal Botanic Garden Edinburgh,). Also on guidance from Henry Noltie, RBGE.