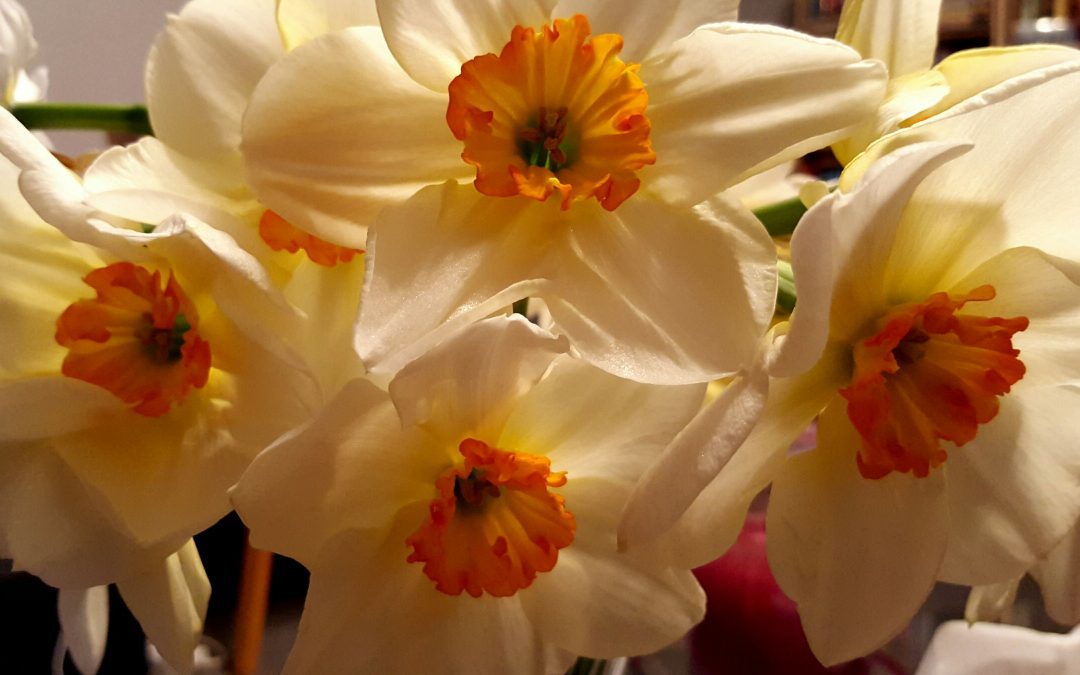 An article by Sarah Barron

Well, Spring is finally here and the weather improving by the day and as I look across my garden the daffodils are in full bloom, and for me they really are the first true Spring flowers.

There are of course, thousands of cultivars and varieties, our Local Authorities favour the largest, with their big yellow trumpets festooning road verges, traffic islands and local green spaces. 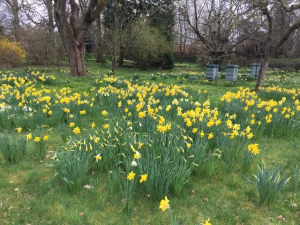 Wordsworth’s ‘Host of golden daffodils’ was the much smaller and less pretentious wild daffodil or Lenten Lily, (Narcissus pseudonarcissus), which coincided with Easter. The wild daffodil is native to many parts of Britain and Europe, prominent in the meadows and woods of southern Europe and North Africa, with the greatest varieties found on the Iberian Peninsula. Once abundant in many parts of the UK it was picked for local markets during the 19th Century and is now much rarer. In Scotland wild daffodils can be seen in abundance at the Falls of Clyde, Scottish Wildlife Trust reserve.

The daffodil has a rich, spiritual, symbolic and literary history. It takes its Latin name from Narcissus the son of the Greek river god Cephissus, who fall in love with his own reflection in the river, unable to move he wasted away until he died. This ancient story was studied by the famous Scottish classicist and anthropologist Sir James George Frazer (1854-1941), who wrote in his renowned work ‘The Golden Bough’ (1890) about his conviction that the myth originated from the belief that man’s soul is situated in his reflection.

In the Christian Faith the daffodil is linked to the Virgin Mary, and is occasionally referred to as Mary’s Star. Look closely in renaissance religious art and you will often see it present as a symbol of the resurrection, self-sacrifice and eternal life.

The scientific name of Narcissus comes from the Greek for deep sleep and is related to the word narcotic. This is because the bulbs contain a toxic alkaloid which, gives relief from pain and can induce unconsciousness. It is said that Roman soldiers, who it is believed introduced the wild daffodil into Britain, carried the bulbs with them to chew on, to mask pain when they were wounded. More usefully today, daffodils are grown commercially in Wales to provide the drug ‘galantamine’, used in the treatment of pain relief and Alzheimer’s disease. 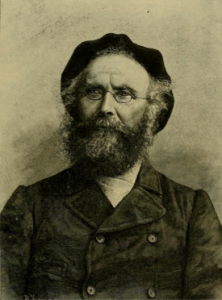 It was John Parkinson (1567 -1650), one of the first English Botanists and apothecary to James 1, who introduced the great double yellow Spanish daffodil, (Pseudonarcissus aureus Hispanicus flore pleno or Parkinson’s Daffodil, to England. One of the most eminent gardeners of his day, he is famous for his book ‘Paradisi in Sole Paradisus Terrestris (Park-in-Sun’s Terrestrial Paradise) written in 1629. It was this work, which listed 94 varieties of daffodil, which inspired the young Scot, Peter Barr, who was born in Govan in 1826 and who is often referred to as ‘The Daffodil King’.When Barr realized how many daffodil varieties had been lost over the centuries, he made it is mission in life to find them and more essentially to rescue the daffodil from obscurity. By 1861 Barr was trading bulbs from his premises in King Street, St. James, London, where his passion for daffodils had fired a gardening revolution. In 1868 he bought the well known collection of daffodils built up by William Backhouse, who had been working on a different range of narcissus crosses. These were taken back to his nursery in Tooting, where they were laid down systematically, along with his own stock, so that he could continue his breeding programme. In 1874 Peter Barr and some fellow gardeners acquired the daffodil collection belonging to another eminent breeder Edward Leeds, his huge collection was in danger of being lost and so was rescued in its entirety by Barr. To breed from these two collections Barr went on to acquire 25 acres of land at Long Ditton in Surrey, where he grow some 2 million daffodils. 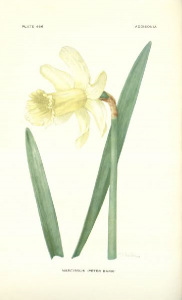 At the turn of the 20th Century, aged just 73 the indefatigable Barr set out on a plant hunting expedition which lasted seven years. His search for new or forgotten varieties of daffodil took him all over the world, to Japan, China, South America and Australia. When he was in Spain he climbed unaccompanied to the top of a 7000 foot mountain to collect a daffodil which had not been in cultivation for 250 years.

In 1903 the first white trumpet daffodil was named in his honour and put on sale at £50 a bulb.

In later life, he settled in Dunoon, where his garden was devoted to primroses and hellebores. He died in 1909, having created a collection of over 400 varieties of daffodil and every year since 1912 the RHS has commemorated his work by awarding the first Peter Barr Memorial Cup.

Peter Barr devised a system for classifying the cultivated varieties of daffodil, published in his nursery catalogues and which was adopted by the RHS as the basis for the classified lists issued from 1908 onwards, thus allowing the RHS to became the International Cultivar Registration Authority for Narcissus in 1955. 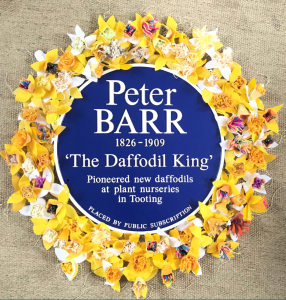 Bringing us more up to date, there is an interesting Scottish connection with Peter Barr’s collections of daffodils. In 2005 Caroline and Andrew Thomson acquired the 110 acre Rossie Estate at Collessie in Fife, which dates back to the 11th century. They set about restoring the house, grounds and historic 1.5 acre walled garden. Caroline, through her mother’s side, is a direct descendent of the Backhouses, a Quaker family from Yorkshire, known for botany and ethical banking. Caroline’s life has now been taken over collecting the famous Backhouse daffodils, bred by three generations of Backhouses, starting with William Backhouse (1807-1869). Painstakingly, she has assembled a collection, sourcing named plants from family gardens, cross referencing stock with various catalogues and lists, often from abroad, as well as the RHS and the Lindley Library. This major task of finding the old Backhouse daffodil varieties, has also involved planting more than 10,000 historic daffodils on the estate, whose ancestry can be traced back to the original varieties of Backhouse daffodils.

She gained National Collection status, for the collection of Backhouse Naricissus in 2016 and has created the Backhouse Heritage & Education Centre, telling the story of the Backhouse family and their passion for breeding daffodils. 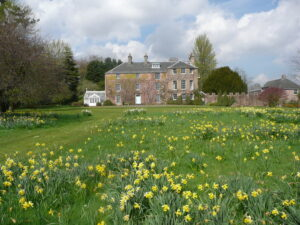