For better or worse, the early months of the New Year have seen the culmination of several long-running conservation cases for Scotland’s Garden and Landscape Heritage.

These include the outcomes of appeals for a large-scale tourism, leisure and housing development at Loudoun Castle, and the quarry extensions at New Lanark, plus the long-awaited opening of the last section of the Aberdeen Western Peripheral Route.

Early in the New Year Ministers upheld the Reporter’s advice, refusing consent for a large-scale leisure and tourism development, including over 1000 houses, at Loudoun Castle, East Ayrshire which was lodged in 2015. It was encouraging to see that one of the reasons given for refusal was ‘the scale of the proposed enabling housing development would have an adverse impact on the Loudon Castle Historic Garden and Designed Landscape’. This was especially so as, although Loudoun Castle is included in the Inventory, the designed landscape is in a very degraded state and was home to the Loudoun Castle Theme Park for many years. The full report is available here.

In contrast to this, Ministers have recently, in part, gone against the advice of the Reporter in their decision regarding the proposed expansion of Hyndford Quarry into the buffer zone of the New Lanark World Heritage Site, which includes part the Falls of Clyde Designed Landscape, another Inventory site. Again, the designed landscape was taken into consideration but whilst the Reporter considered both the western and southern proposed expansions zones would ‘avoid compromise to the integrity of the Falls of Clyde Designed Landscape, its character and the objectives of its designation’, Ministers have only upheld this advice for the southern zone and not the western section. So, a partial success as it now looks as, although the southern expansion could go ahead, hopefully further damage to the Falls of Clyde Landscape, in particular the Bonnington Estate, can be avoided. Again the report can be read here.

CEMEX, the company seeking to extend its New Lanark operations, is also wishing to expand operations at it’s Cambusmore Quarry to the east of Callander, Stirling. CEMEX has been extracting in this area since 1965 with operations concentrated on The Gart estate, identified by the Loch Lomond and the Trossachs National Park as a locally significant designed landscape. It is likely they will now lodge a planning application with Stirling Council for an eastward extension of operations into the parkland of the adjacent Cambusmore Estate, another designed landscape, likely to be of local significance.

Lastly, late February saw the opening of the final stretch of the Aberdeen Western Peripheral Route and the impact on Kingcausie House and its locally significant designed landscape was finally revealed.

When the line of the road was first proposed around fifteen years ago, SGLH (then GHSS) argued for the protection of all designed landscapes along its route but unfortunately the line chosen runs within 100m of Kingcausie House, cutting through its parkland and raised on an embankment to cross the River Dee to the north. Judging by some television interviews conducted to announce the opening of the road, Kingcausie is now considered a suitably scenic backdrop for this new stretch of the A90 but we will leave it for readers driving along the road to make their own decisions about the impact on Kingcausie and its landscape. 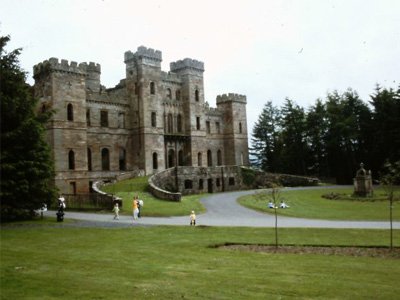